A typical construction company had a long-term site for road bridge repairs that has just been extended to Phase 2. One of the major operating costs during Phase 1 was power generation for the onsite cabins and they want to understand where power is used, and what could be done to reduce costs. From a corporate perspective, they also want to reduce carbon usage, and diesel. For the site connection the Erica distribution was hard wired in, replacing the existing distribution panel, and configured to suit the current socket loadings.

The site was monitored for two periods, 1st August to the 31st of August and 16th January to the 31st of January, to build a picture of winter and summer use. Heating is a major consumer of power, so the effects of weather on usage was considered an important data set. This would help understanding of running costs during winter to determine if better insulation would help, and whether a smaller generator could be used during summer. 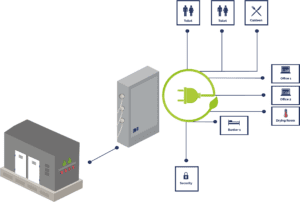 Erica by IDE is a power monitoring solution that has been developed to support onsite power management by recording usage across multiple connections on a continuous and long-term basis.

Recording power used, and storing this in the Cloud, an analysis can be carried out to identify:

> Where power may be wasted
> How to configure the site for lower usage
> Encourage good onsite discipline.

For this project IDE conducted two separate phases, one in January and one in August. This enabled a seasonal and daily analysis, to understand power needs over the long term.
The set up, on the right, shows the range of cabins.
The site is powered by a 100kVA generator set, which is connected through an Erica enabled site distribution panel, with monitoring on each connection.

For the site connection the Erica distribution was hard wired in, replacing the existing distribution panel, and configured to suit the current socket loadings. This was done out of hours, and the system was installed and running in a few hours. A 4G router was installed to access the Cloud so no access was required to the corporate IT system. 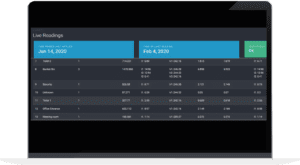 This is an important consideration to many companies in order to preserve security of their IT Systems. Live data is accessed through a simple web interface, again using no installed software. 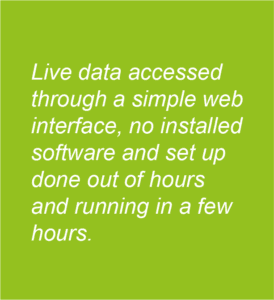 Data collection was set to record results at 5 second intervals for each connection, which gives very good data analysis of power spikes as well as energy usage.

The dashboard, shown above, is a live feed from the distribution panel, helping the onsite team see the effects of turning power consuming equipment and facilities on and off.

An analysis of the data was conducted by the IDE team and key findings provided to the site. Below are some examples of findings, and not untypical of what has been discovered on other sites. The data is presented using Microsoft PowerBI, a popular business information suite capable of handling the very large data sets created by long term monitoring.
PowerBI accesses the Cloud based data, runs the analysis and presents charts through a web interface. By using industry standard tools, many larger organisations in-house data analysts can create powerful reports linked to other business dashboards.

On site there are two toilet blocks, essentially the same units duplicated next to each other. The charts below show a seven day monitoring period in August. 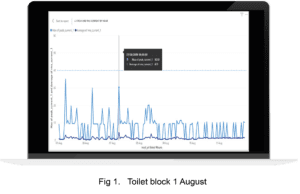 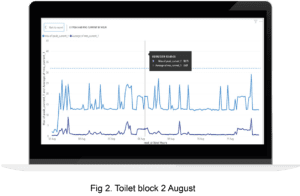 Toilet block 2 heating has a much higher usage than the other cabin, with a suspected faulty thermostat, or heating set very high. This significantly increases energy usage, with an additional 28kWh used over the 7 day period ( 117% increase)

Both blocks were heated over the weekend period when there was no one working, using 1.5 kWh for block 1, and 13.3 kWh for block 2.

Potential saving per month is 112 kWh for repair/setting of block 2, and a further 6 kWh from weekend switch off. The total monthly saving could be 118 kWh, at a typical cost of 20p/kWh a saving of £23.

The below graph shows the recording for January (winter month). 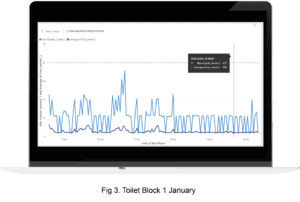 > Additional energy usage in the January week was 98kWh, showing the extra demand based on heating need.

> 30kWh was used in unnecessary weekend heating. > 28kWh was used to heat during the night Monday to Friday, which could have been saved as no personnel on site.

The office block is used by up to 10 people, 5 days a week between 8:00 to 18:00. The major power usage is heating, and the graph below shows the energy profile over the January week. 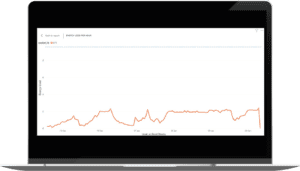 > Contrary to expectation, the highest power demand is during the cold nights when the office is empty, and during weekends (18th and 19Th). The presence of staff reduces the need for heating, but empty rooms when the night temperatures fall have a higher demand.

> Heating during the weekend used 90kWh (46% of the weekly power), and night time (18:00 – 8:00) Monday to Friday 53 kWh, 27% of weekly power. The weekend power consumed 2kWh continuously, average temperatures were 8 C during the day and -1 at night. Interestingly we would expect more power at night, but this did not occur. This is an area for further investigation.

> The thermal efficiency of the cabins could potentially save money. > The office block data showed over 50% of energy was used to heat empty cabins during the January week, which could have been drastically reduced with good onsite discipline, or timer control of power sockets. 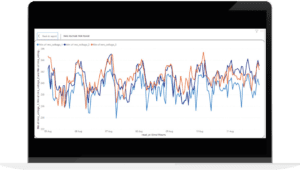 Voltage levels can vary depending on load, and it is good to check for both higher voltages than allowable and low
voltages that can cause IT issues. The site under review showed voltage variation between 234 V and 244 V through the week.
This is a good result and shows the generator is working well. 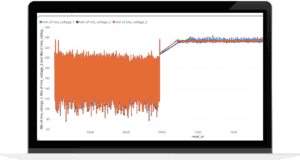 Above, is an example from another site that were having problems with equipment dropping out.
A monitoring exercise showed some serious voltage stability problems from the generator that required repairing.
As can be seen, during one night period the voltage became very unstable, dropping to around 80V. This happened on all 3 phases, and caused some computers to shut down.

Correct sizing of generator can have a significant impact on both weekly rental cost, and more importantly fuel usage and reliability.
Under utilised generators run less efficiently and have less reliability due to carbon build up. When initially specifying site power often
theoretical a worse case is assessed and the generator sized to meet this. The graph below show the total power usage over the January
week, with temperatures down to -1 C over night. 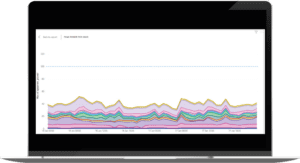 The dash line is the generator capability (100 kVA in this case) and a stacked chart of power of each socket. As can be seen, maximum load is 56 kVA during the period, with a typical load at 40 kVA. In this situation a 60 kVA generator would power the site, with loading typically at 66%. Using data from Atlas CopCo generator specifications, this could reduce hourly fuel usage by 0.65 l/h, equivalent to 109 l/week. An alternative solution could be to use the additional capacity to power EV chargers and/or battery site equipment. As the generator is loaded to a greater extent its diesel l/kWh reduces, and encouraging EV usage to attend site impacts positively on the wider carbon impact.

Generator runs between 40-50% loading, less efficient and power usage could be improved.

The above examples were replicated across the site, which demonstrated a potential 50% plus reduction on power need through improved timing on heating and lights, and also the need to ensure heaters are correctly maintained. The site discussed was looking at fitting solar panels to reduce power costs, at additional investment, whereas simple changes would have a much greater effect on cost and carbon reduction throughout the year. It would be possible to reduce the generator size, even without the other savings, saving approximately 5% of diesel costs and complimentary CO2 reduction of 291 kg per week (based on standard of 2.67 Kg /l Diesel standard). With all changes in place, the generator could easily be downgraded again, or it may make grid power supply an effective option, having a major impact on cost and carbon reduction. By switching to a 40KVA generator running at 75% ( 30KVA), a saving of 3 l/h, or 25%, and 1,204 kg of CO2 per week.

Go back to Erica

Erica is an on site power management tool providing you with usage data so power can be managed effectively with high granularity of power data easily analysed, you will have the ability to control usage and pre empt fault conditions.

Read our case study on event monitoring with Erica.

Speak to one of our IDE Advisors about Erica